One of our hosts, Paul Clifford will be starting an 85-mile walk along the length of Hadrian’s wall this Sunday. He has kindly decided to split any sponsorship he makes between us and another charity he supports- Auditory Verbal UK.
In this blog he describes the walk, and what motivates him and his wife to host.
If you would like to support him, you can donate here: https://www.totalgiving.co.uk/mypage/paulonhadrianswall

Hadrian’s Wall has been a feature of the English landscape for almost 2,000 years. Much of it is still visible. It runs for 85 miles across England at more or less its narrowest point between the Solway Firth and Newcastle. You can walk its length in 6 days which is what I shall be doing, staying at a variety of b&bs along the way, carrying everything I need on my back. It is perhaps ironic that I shall be following a wall built to keep people out in order to raise money to help keep people in.
My wife and I have been involved with Sanctuary Hosting for the last three years. In that time we have given a short-term home to a number of asylum-seekers and refugees from different parts of the Middle East and Africa. We have been impressed by their courage, tenacity, ingenuity, resilience and genuine desire to make a contribution to British society. They have escaped persecution and civil war and some of the stories they have shared with us of what they had to go through to reach Britain are both jaw-dropping and depressing in what they reveal of the cynicism and incompetence of officialdom across Europe.
They have cooked for us, entertained us with Ethiopian hip-hop and Syrian street music, engaged animatedly in religious and cultural debate, helped on our churchyard-clearing working parties, watched our DVDs (goodness knows what our Somali guest made of Chariots of Fire, but he was polite about it) and even made an effort to seem interested in cricket.
What we have offered them seems infinitesimal given the scale of the challenges they continue to face, but it is one rung in a ladder of support which Sanctuary Hosting and similar organisations provide and which may one day help them to get over the wall that confronts them to find a secure and peaceful future.

We are lucky enough to have had Dr Yasmin Gunaratnam from the Sociology Department of Goldsmiths College in London,  interview fifteen of our volunteers who were hosting guests in 2017/18.

This study is a record of those interviews, with an introductory explanation of the political and social environment of the time, and since.

The focus of the piece is on the motivations for hosting, and what part hospitality plays in that. It is a very insightful read and may be useful for anyone considering hosting themselves.

The research is part of the ongoing Cartographies of Hospitality study, led by Dr Fataneh Farahani (Stockholm University), with research also being carried out in Sweden and Turkey.  We will be sure to post about that when it is completed.

Read the report:
Cartographies of Hospitality

One of our wonderful Volunteers- Anne Wheeler, a host and support worker in Oxford-  has written from the heart about her experience with Sanctuary Hosting. 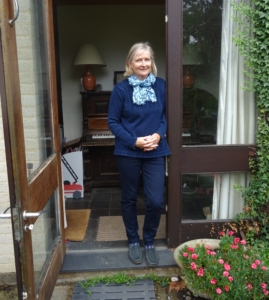 It was at the tail end of 2015 that we first became involved with hosting refugees. Host Oxford, as it was then called, came into being following the Refugees Welcome demonstration in Oxford in July 2015. The founder of the hosting scheme, Wyon Stansfield, asked people if they would be prepared to open their homes to a refugee or vulnerable migrant. That was the beginning.

In 2016, Host Oxford, along with the British Red Cross and Citizens Advice Reading, won funding from the Big Lottery to provide support to refugees and vulnerable migrants across the Thames Valley. It changed name to Sanctuary Hosting and in 2017, it became a registered charity.
After an initial interview, a look at the accommodation we could offer to check its suitability, and a DBS check because of the vulnerability of the guests, we were on the list.
Our first guest arrived in January 2016; the weather was typical of that time of year. Cold and very wet. He had been living on the streets, walking around through the nights as he felt unsafe otherwise, and sleeping during the day. He had by then received his papers and was officially a refugee, but destitute. Once he had a safe place to live, he found himself a job and enrolled at the FE college to resume his studies. He had fled a country where he had been imprisoned for his religious beliefs, escaped, and made the highly dangerous journey to the UK. He stayed with us for about 15 months, becoming very much part of the family and saying what has since been repeated by other guests: that it is not just a matter of having a roof over one’s head, but having a home and a family.

Since then we have hosted a victim of human trafficking who had been sent to prison for working illegally in the care sector, a young man escaping a highly oppressive regime and now someone who is claiming asylum from one of the most violent and troubled areas in the world.
When a guest arrives, we agree an informal set of rules between us; will we share the kitchen, the washing machine, and meals. The length of stay can we offer (which can be terminated at any time), for example.

Listening to their often harrowing stories is not always easy and should one ever feel overwhelmed by what one is told, Sanctuary Hosting offers counselling from someone trained specifically in this area. In addition, training is offered on relevant subjects such as human trafficking, and opportunities are given to meet up with fellow hosts and support workers.

Hosting is not the only role I play. Each guest and host is allocated their own volunteer support worker so that any problems that might arise can be sorted out more easily. I have now supported two other guests and we meet up for coffee, advice (and English lessons for one
taking his GCSE) and friendship at regular intervals. As part of this role, I have given support in enrolling on college courses, opening bank accounts, registering with doctors, helping find affordable accommodation (the scheme aims to support guests to move on), and completing
interminable forms in the vain hope of getting on a housing list; a new experience for me, but one which gave me an insight into the difficulties many face. I’ve also been part of interviews of prospective guests to ensure they are eligible and suitable to be hosted, and in interviewing prospective hosts for their suitability too.

The usual clichés apply when thinking of the benefits of hosting migrants: of course it can only be good to provide a vulnerable person with a safe and comfortable space and hold out the hand of friendship and support but there is a great deal to be gained too; we have learnt of, and been inspired by, their courage, resilience and determination to make the most of opportunities now open to them. Any difficulties or misunderstandings have almost always stemmed from differences of cultural assumption and expectation. But we have learnt of, and benefited from learning, about other cultures and enjoyed innumerable discussions on our similarities and differences. Right now, the kitchen has been given over to Middle Eastern cooking – and that really is a benefit! 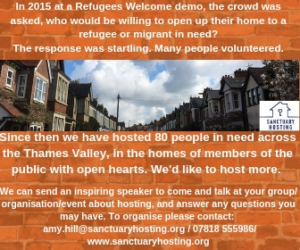 We’ve created a flyer for anyone to use, to advertise the fact that we’re really happy to talk to any groups about hosting and volunteering for us. Please get it out there for us- online or as a physical hand-out, in Oxford, Reading, Milton Keynes and across the Thames Valley. We want to spread the word! You can see it here, and download it as a pdf.