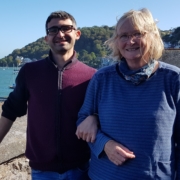 As a volunteer guest support worker with Sanctuary Hosting, we are asked to keep in touch with a guest, check they are happily settled with their hosts and, if necessary, liaise with the host’s support worker should any difficulties have arisen.

On a roughly weekly basis, depending on needs, I would aim to contact them just to catch up, listen and check they had any particular issues with which I could support them (though not legal ones).

I have now been fortunate enough to have been a volunteer support worker to seven different guests.  Some of them have required more input than others; for two of them, I had to do little more than text on a regular basis and meet for the odd cup of coffee, pandemic permitting.  Others required more support and have remained friends ever since.

The first person I supported was a young man who had suffered a very long and distressing time as an asylum seeker before finally getting his refugee status.   His long wait had left him understandably demoralised so we met weekly for moral support and practised English together.  I was deeply touched when he rang immediately to let me know he’d received the long awaited letter and we duly celebrated together with cake, balloons and the wonderful Sanctuary Hosting Service Co-ordinator!  But help was then needed with filling in innumerable forms for the Job Centre and the Housing Register and, in the search for accommodation, going to the City Council Housing Officer together and to Crisis for further advice and support.  I had helped him with his application to study A levels at our local FE college and he then asked for help with his university application where, to his great credit, he is now studying.

Next was a young woman, who had suffered from abuse, spoke very little English and knew just one person in Oxford.  Over the weeks, she needed help with filling in countless forms and we went together to open a bank account,  register with a doctor,  practise her English,  go shopping as well as meeting up for coffee and checking that she was settled with her hosts.  This was some three years ago now, but we still keep in regular touch and continue to meet as often as we are able.

A woman, another abuse sufferer, was the next person I supported and again I met up with her regularly for coffee and chats,  exchanged regular text messages and calls to check she was ok, checked necessary bus routes together,  helped her move to a new host, and finally to independent accommodation.  With her, I went shopping and to a food bank – an entirely new experience for me.

By contrast, the next guest really only wanted regular messages and moved on very quickly so that little input was required, though he still chooses to keep in touch.  He was succeeded by a young man who arrived at the start of the pandemic, so that most of the support needed, apart from the usual checks on his general welfare by phone and text, was liaising with a charity to ensure he was supplied with food, and then with Crisis to help with finding independent accommodation.

The most recent guest was going through a deeply distressing and worrying time and we formed a bubble during the last lockdown which meant we would have a weekly walk together, giving us time to talk and, eventually, to laugh together.  She too has now moved on but I realise how much I too gained from our times together and it is always good to find a text from her, saying how she is now getting on in her new life.

So, can one sum up what is involved in the volunteer support worker role?  Not easily.  It can vary from a guest needing very little support, other than a regular catch up time, to someone whose needs are necessarily greater.

All that I can say is that everyone I have worked with has shown an immense level of courage and determination to make the most of their new found safety that I find humbling and it is a privilege to have been around them.  And best of all, I have some amazing new friends.

Want to join the discussion?
Feel free to contribute!